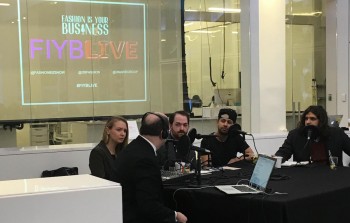 influencers [Episode 68]) joins Pavan Bahl (Open Source Fashion), Rob Sanchez (Ralph and Remington [Episode 22]), Marc Raco (The Hope Is Project), and guest host host Julia Macalaster (COO/Co-Founder of Preeline [Episode 16]) for FIYBLIVE, recorded on location at the Normal Earphones Headquarters in New York City. Spadafora returns to the show after recent wide media overage to share what obstacles, implications, strategy, priorities come with that exposure and success. He talks about PR strategy leading up the media frenzy, and how D’Marie’s analytics lend to headlines. He discussed Kendall Jenner’s math analytics, how pay-for-play makes sense, when click-throughs and sales conversion can be 14-16 times one’s investment, the recent launch of a mobile app, and debunking the “overnight success” assumption. Plus, Spadafora rides momentum from a previous segment of “Feed the Animals”. 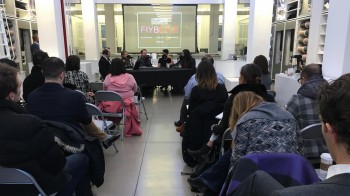 Spadafora discusses his biggest challenge beginning work with publications, the value in being open to publications not normally considered, how Pavan and Open Source Fashion helped D’Marie, and how Spadafora’s dollar is worth 100. Finding right PR team, why journalists need to actually do research, and actively protecting a clear brand message in media coverage. He shares the process of scaling staff by nearly 30 positions to receive the influx, why he is raising a Series A round for cash support, why it is strange asking for cash after a media flurry, understanding sources of revenue, and his projections for the next two years. Avoiding people who “yes” you, and closing deals to avoid bubble-popping. He also reveals the recent momentum of activity and whether it transcended the heavy holiday period.

A conversation on how messaging has changed because of this activity, NFL partnerships, NY Fashion Week, using data to tell the 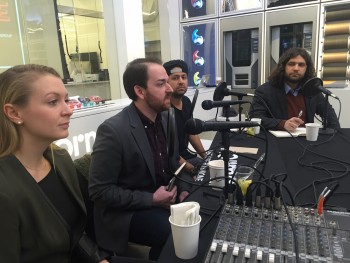 next story the next Top 10 List, and the goal of positioning in the press as an authoritative figure, and being seen as content distribution partner. Leveraging other companies to be more efficient as a team, having more access to social media platforms and how making use of that info. Why D’Marie does not advise brands to be early adopters of up and coming platforms, and whether automating the process of brand consulting is a good idea.

Off the Grid Questions reveal dollar pizza, the daughter of a code-writing nerd, looking like a CEO, the unspent twelve dollars, a singing queen, Girl Scout Cookie success, sneaking into Project Runway, which Kardashian Frank is the most like, and an invitation to Kris Jenner.